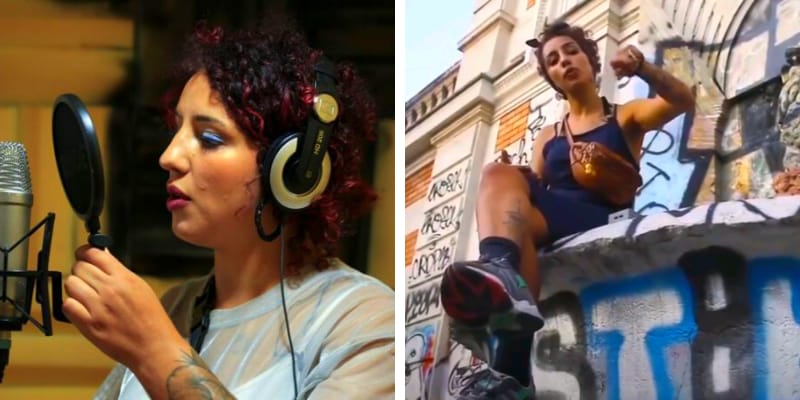 Houda Abouz is 24 years Morocco Rapper and studies film in Tetuan. She started her career in Hip-hop and Rap from a very young age.

Abouz performed for the first time in January this year along with three biggest Male rap star’s of Morocco, Elgrande Toto, Don Bigg, and Draganov. She appeared in Hors Serie, a song that has been viewed 16 million times on Youtube.

Furthermore, she made solo debut single KickOff, in which she rails against society and says does not offer women equal opportunities. Abouz is a self made artist and uses her passion for music as a defense mechanism in patriarch Morocco.

Furthermore, in the song KickOff she sings “Badass, I survived war, drugs, craziness, and love,” and “Many things did not work out because we are ladies in the country of the d**k.”

In an Interview with Reuters she said “I am a self-made artist and I write my own lyrics, speaking my mind,” and added, “Rap is my passion and my defense mechanism in a patriarchal society.”

Then, Abouz continued by saying her lyrics, delivered in Moroccan Arabic dialect with phrases of French or English thrown in, are sometimes explicit. Her stage name is “Khtek”, meaning “your sister”.

Recently, a rapper, Gnawi, was sentenced to a year in prison for insulting the police in a video and since then the country’s rap scene has become embroiled in politics. However, she is not alone other Moroccan female hip-hop stars, like Manal, had a hit song “Slay” that was viewed 44 million times on YouTube.

She calls herself as “Khtek”, meaning “your sister” where its an Insult used aginst woman, the rapper rallied for women causes using her music, while the conservative dislike what rapper sings and artist like Abouz create their own track to express their fury and dissatisfaction regarding unemployment, inequality, and oppression.

Her other songs in collaboration with other artists gathered Million of views on Youtube and other social media platforms. Abouz told in an interview “All women rappers have their own individual styles but you can’t say that there is a competition between us, because women in this profession are very few,” and continued “I wish that in time we could stop saying female movement and just call the movement, without differentiating men and women.”

Abouz describes herself as a feminist and supporter of LGBT rights and she has been strongly influenced by the pro-democracy protests that shook Morocco in 2011 during the “Arab spring”. However, she has clarified that her music is not serving any political agenda but she tries to unify the community by bridging together music from different parts of the world from Morocco music.