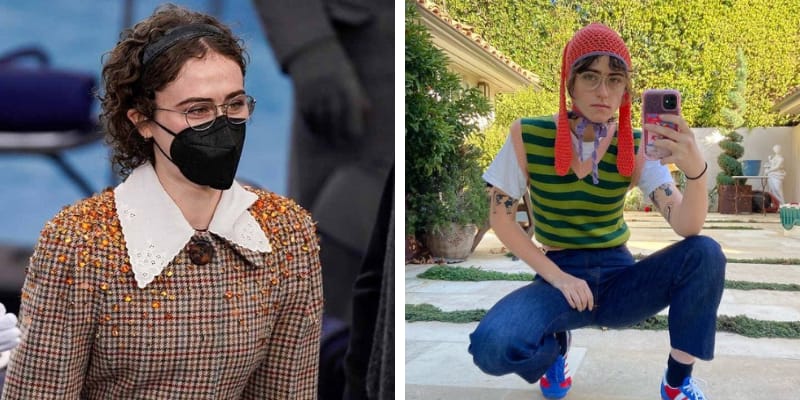 Ella Emhoff was born on October 10, 1999, and from the USA, she is 22 years old during the time of writing. She is the daughter of Douglas Emhoff (Father) and Kerstin Emhoff (Mother),  Ella who also a stepdaughter of Vice President Kamala Harris.

Ella Emhoff is an American model, fashion designer, and artist. She recently completed her graduation from The New School’s Parsons School of Design on Friday, May 14, 2021. She earned a Bachelor of Fine Arts and she is preparing to launch a career as a designer. Her father Douglas Emhoff, Second Gentleman of the United States took to Instagram on May 15th, 2021 to congratulated his daughter and captioned “My darling Ella, we are such proud parents! We love you so much and are very much looking forward to all you do in the future. And, to the other Class of 2021 graduates out there, huge congratulations!.”

Whereas Kamala Harris, also congratulated her stepdaughter over Instagram on May 15th, 2021, and captioned “Congratulations to our daughter Ella on her graduation. I am so proud of you. Keep dreaming with ambition and there is nothing you cannot achieve. Love, Momala.” Currently, she is in media attention, after she was rumored to be dating Sam Hine aka Samuel Hine who is an assistant style editor of GQ and GQ Style. Sam has shared her picture alongside Ella Emhoff, who is seven years elder than her. They were first spotted on a dinner date in Feb at Dr. Clark in Chinatown. However, both Ella and Sam have publicly not addressed the speculation about their relationship.

Who is Ella Emhoff? 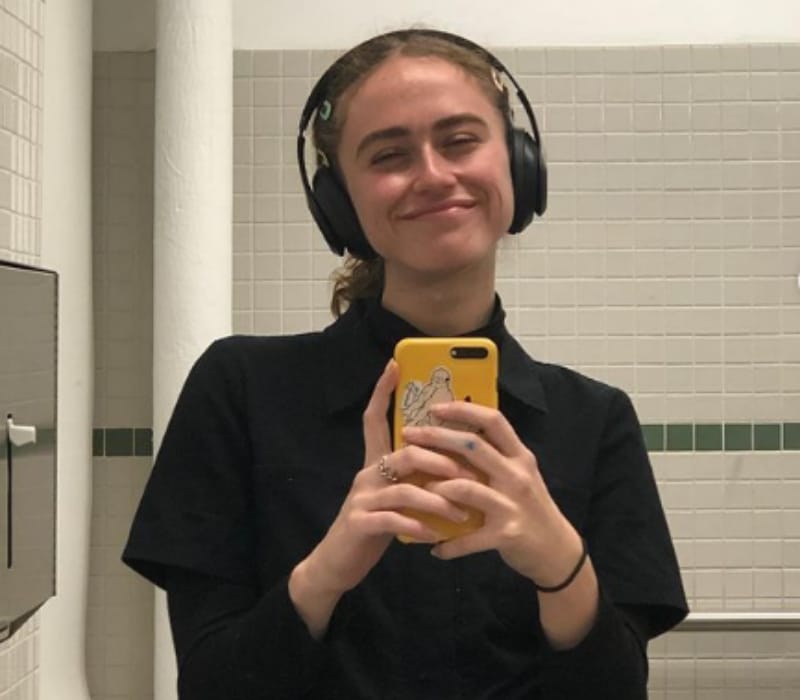 She’s studying at Parsons School of Design in New York City, Ella is set to graduate in 2021. Then, she is planning to take a BFA (Bachelor of Fine Arts). In the Inauguration, the 22-year-old student Ella Emhoff, who really had fashion pundits cooing at her outfit choice. Furthermore, there’s no denying that the Inauguration of US President Joe Biden was the fashion event of the year. Ella wore a sparkling plaid Miu Miu coat with an oversized collar over a Batsheva burgundy gown and completed her look with black leather gloves, boots, and of course, a face mask.

On Instagram, Ella boasts 228k followers, and her page is devoted to the colorful knitwear she makes, from rainbow-striped pants to checkered, lime green bikini tops. Being an artist and textile design student, Ella is specializing in knitwear at Parsons School of Design in New York City. Previously, she did her Internship at A.L.C, and from a very young she was into Dress designing. In an Interview with Garage, she revealed what she might wear to the inauguration, weighing the possibility of knitting her own suit for the big day. 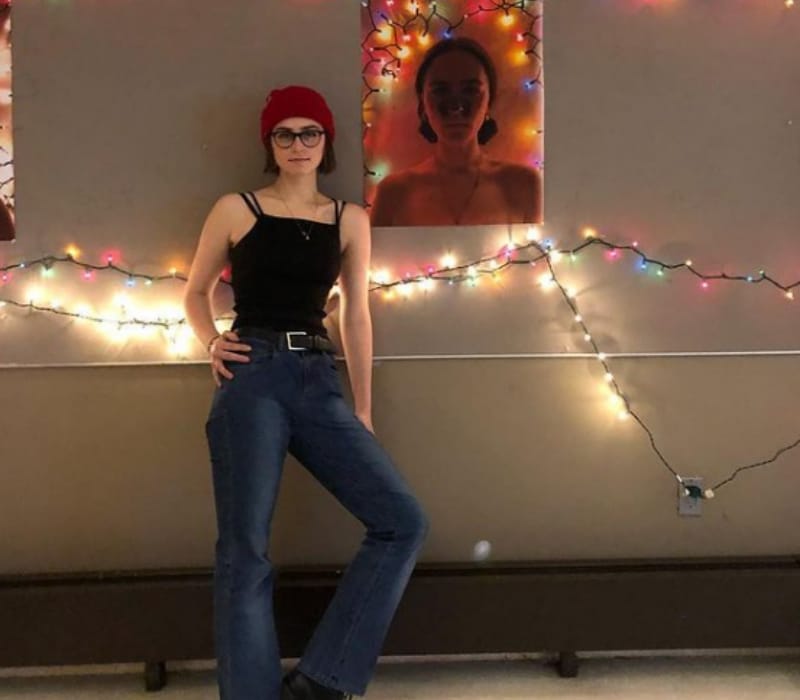 She said, “I want to, but.. my style and my practice are so different, but I think I might have to just make an exception because, for such a momentous occasion, I think it does require a pretty momentous outfit.” Besides this, Ella founded NGO Pipelines in 2016 where it provides an Advertising platform for the youth to get the job. From June 2018 to August 2019, she served as the Fabricator at The Haas Brothers. Ella even has her website where she sells customized creations such as customized pants, pants and intarsia, tank tops, crochet bucket hats, and tote bags. In 2014, she appeared in Bo Burnham’s video “Repeat Stuff.”

On Social media, Ella shares political posts and one such post is about Trans Rights, she wrote “For anyone who thinks casual transphobia and jokes about gender are funny, this is what trans people, especially trans women of color, deal with. This and worse. At least 18 trans people have been murdered in the US this year. Probably more but we don’t/can’t know for sure.” 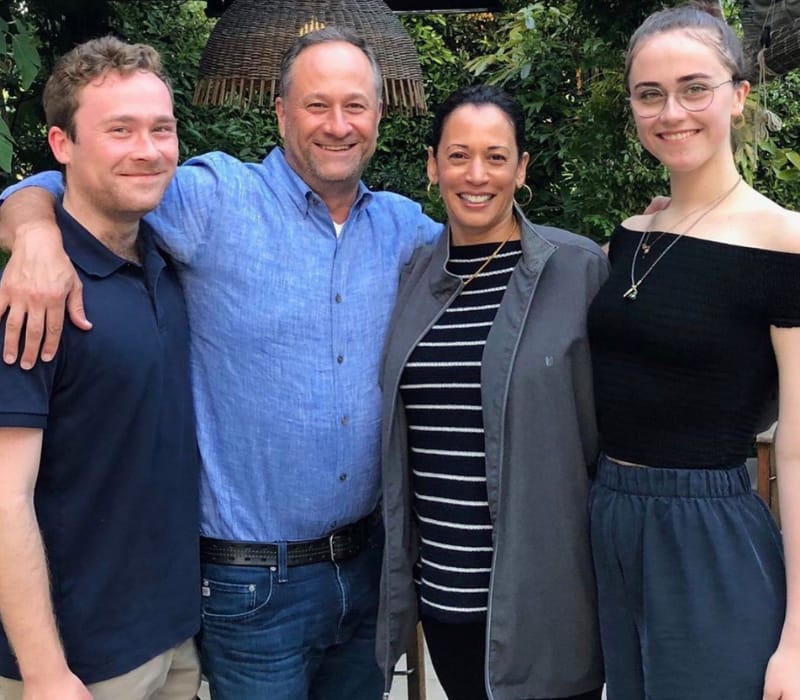 She is born to Kerstin Emhoff (Mother) who is an American film producer and founder and CEO of the production company Prettybird. In 2010, Kerstin was co-executive producer of The Tillman Story and Manhunt: The Inside Story Of The Hunt For Bin Laden three years later. In 1992, Kerstin tied the knot with Doug Emhoff but they divorced 16 years later, the former couple shares two children – Ella and Cole. Ella’s brother Cole Emhoff was named after the jazz singer Ella Fitzgerald.

Cole worked at William Morris Endeavor, a highly rated talent agency, from 2018 to 2019, he attended Colorado College as an undergraduate, and now he is pursuing his career in the entertainment industry. Her father Doug has made history by becoming the first-ever Second Gentleman. Kamala Harris married Doug Emhoff on August 25, 2014, at a courthouse in Santa Barbara.

Kamala in an Interview with Elle Magazine talked about the experience of becoming a step-parent, she said “Children need consistency; I didn’t want to insert myself into their lives as a temporary fixture because I didn’t want to disappoint them. There’s nothing worse than disappointing a child.” Then, she added “So, we took it slow, and Doug and I put a lot of thought into when and how I would first meet the kids. And that meant waiting. As we waited, anticipation grew. When the day finally came, I had butterflies in my stomach. The plan was to go to a seafood hut off the Pacific Coast Highway called the Reel Inn, a favorite of the kids.” Later, she continued “Cole and Ella could not have been more welcoming. They are brilliant, talented, funny kids who have grown to be remarkable adults. I was already hooked on Doug, but I believe it was Cole and Ella who reeled me in.”

What is Ella Emhoff Net Worth?

The estimated Net Worth of Ella Emhoff is around $100K USD.