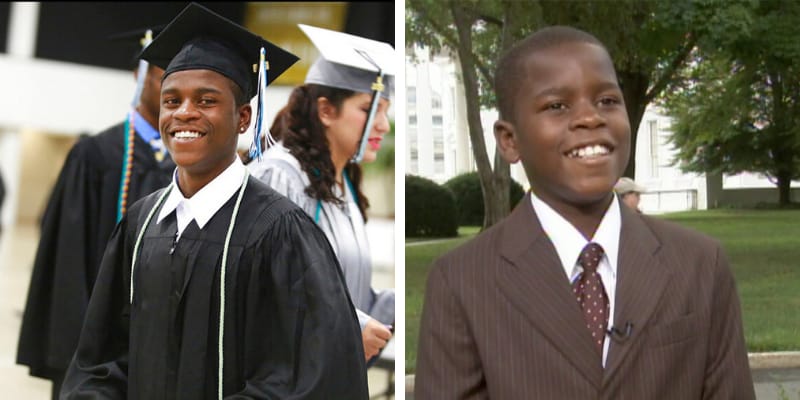 Damon Weaver a 23 years old man, caught national attention as a student reporter and well known as the youngest person to interview with a sitting president Barack Obama in 2009 at the White House has died on May 1st, 2021 due to natural causes.

He was just 11 years old and a student at Canal Point Elementary School, when he conducted an interview and met the former President Obama on Aug. 13, 2009, asking questions that focused primarily on education. He covered bullying, school lunches, conflict resolution, and how to succeed.

His sister Candace Hardy said “He was loved by everyone.” added “No matter if it was a stranger, his mom, or a family member, he was just a ball of light with so much energy. He was always positive, always had a smile on a face and he was always a joy to be around. He left an impact on a lot of people.” also said “Very outspoken, outgoing. He never said no to anybody.”

The funeral home posted on Facebook wrote “He saw the road was getting rough, And the hills were hard to climb. So He closed your weary eyelids, And whispered: “Peace be thine.” It broke our hearts to lose you, But you did not go alone; for part of us went with you, The day God called you home.”

With sadness in our hearts, the Brown & Bussey’s Funeral Services LLC and the Weaver family announces the passing of Mr. Damon Lazar Weaver AKA “BAMA” of South Bay, Florida formally Pahokee Florida, answered his Savior’s call to enter eternal rest on Saturday, May 1, 2021. The arrangements at this time are forthcoming but we do ask that you keep Mr. Weaver’s family in your most sincere prayers.”. The private funeral service limited to family was held on May 15th, 2021 at St John Baptist Church in Belle Glade, Florida.

Who was Damon Weaver?

Damon Weaver a 23 years old man and well known as the youngest person to interview with a sitting president Barack Obama in 2009. Before interviewing the president, he had interviewed big-time celebrities including Samuel L, Jackson, Dwyane Wade, and Oprah Winfrey. He did his graduation from Royal Palm Beach High School whereas most recently, he earned a scholarship at Albany State University in Georgia, he wanted to earn a degree in communications and had a dream goal to cover the NFL as a sports journalist.

On Dec 13th, 2020, he shared about his sixth Grade scholarships on Instagram and captioned “I received two full scholarships in the Sixth Grade and didn’t know what a scholarship was. Youngest of 5 kids to go get it! At 22 I have beaten so many statistics against black men raised without a father. Challenged by so many things I still did it! Never chased clout, this is not much compared to what I will do in the future!.”

In Aug 2016, he shared an email which was sent by former president Obama congratulated him for his graduation, in which it was written “Mr. Damon Weaver Wellington, Florida Dear Damon: Michelle and I are delighted to send our heartfelt congratulations on your graduation. In your achievement, I see not only the culmination Of years of hard work but also a unique piece of the mosaic you form with students from the class of 2016 across our Nation. Together, you embody an America that finds unity in its diversity, draws strength from a spirit of common purpose, and aspires to reach the breakthroughs of tomorrow. Unencumbered by what has been and unafraid of new frontiers, you remind us that what has kept our country moving forward through everything we have experienced—what defines us above all—has always been our unwavering belief in the possibilities of the future. Congratulations, again, On this accomplishment. As you reflect On the efforts that brought you to this moment and look toward all that lies ahead, know that your President is proud of you and inspired by your generation.”

How old was Damon Weaver?

Damon Weaver was born on April 1st, 1998, and from the USA, he is 23 years old. He was born to Regina Weaver (Mother), there is no much information regarding his father. However, we will keep you updated very soon. He has a sister named Candace Hardy.

Who was Damon Weaver Girlfriend?

We do not have much information regarding relationship status.