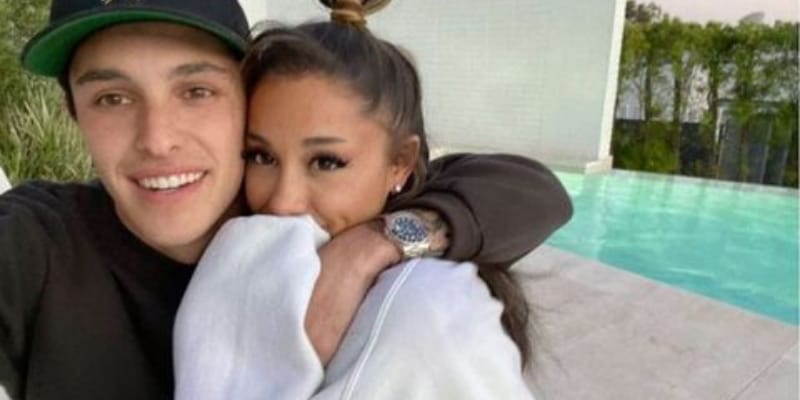 Dalton Gomez is a Real estate agent and well known as a husband of Ariana Grande aka Ariana Grande-Butera is an American singer and actress. The couple reportedly tied the knot on Monday, May 17th, 2021, in a secret wedding with less than 20 people. Grande’s rep confirmed their wedding news and said “It was tiny and intimate — less than 20 people. The room was so happy and full of love. The couple and both families couldn’t be happier.” Said “Both Ari and Dalton love Montecito. They spend a lot of time there,” added “It seems only natural that they would get married at Ari’s beautiful and historic house.”. Many fans are curious to know more about her husband Dalton Gomez.

Meanwhile, fans and friends congratulated the couple through social media. One user tweeted “So happy for her, congrats. I wish you all the happiness of this world.” Another tweeted “y’all calling us obsessed but y’all b the ones bringing Selena in this… just be happy for her and STFU congrats ari” Another user said “If you don’t have anything nice to say, don’t say anything at all. Praying for a lifetime of faith, love, and happiness! Congratulations!.”

Who is Dalton Gomez Net Worth?

Dalton Gomez is 25 years old from Southern California, California, the United States, he is well known as a Luxury Real estate agent and the Director of Operations for Aaron Kirman Group. He has worked with A-list buyers and has sold multi-million dollar homes. Dalton Gomez serves as the sole buyer’s agent for Aaron Kirman from his experience, he has holds one of the largest Rolodexes of A-list buyers and connected many high profile deals across the city. he has represented significant sales including Craig Ellwood’s Case Study #16 and Pierre Koenig’s Case Study #21. Along with Mr. Kirman. He has around 4,278K followers on Instagram with 91 posts while writing this article. He attended Citrus Valley High School, Redlands, California, and graduated from the University of Southern California, Los Angeles.

According to the Aaron Kirman Group bio “Aaron Kirman Group was founded in the spring of 2017 on a single guiding principle, to build a team where a group of like-minded individuals could come together, share resources, grow, support, and compete together in the most dominant and competitive market in the world and rise together. The team rapidly grew over the next 18 months from just 7 agents at its inception to almost 70 today. Just this past spring, The Wall Street Journal, and Real Trends ranked Aaron Kirman Group as the 10 highest producing teams in America selling $528,000,000 in residential real estate.

Dalton bought a diamond-and-pearl engagement ring for Grande, the estimated worth of her ring between $200,000 and $300,000 and some say it’s closer to the $160,000 to $200,000 range. According to the company website, Gomez has sold homes worth anywhere between $9.9M and $12.5M. He is living in a luxurious mansion in the Hollywood Hills, Los Angeles worth around$13Million, which he purchased last year during quarantine. With all the assets put together, his estimated Net Worth is around $20 Million USD.